“From the moment we laid eyes on the land, we knew we had discovered something special…” 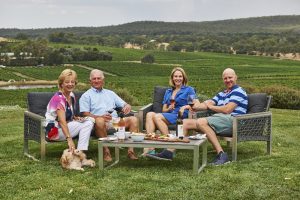 That something special was rich undulating fields in the shadows of Mt Ida, Heathcote, Central Victoria. Tony and Linda Hunter’s vision was to create a family-run boutique vineyard where quality, passion and energy were reflected in the wine.

Embraced by children Mark and Jodi and their respective partners Melissa and Brett, Sanguine Estate expanded from 16 acres to 55 in just five years.

The family’s desire to produce great wine flows through every glass. Through natural winemaking techniques combined with small batch processing and hand plunging, the purity and integrity of the wine is enhanced.

This love for creating fine wine has its roots over 100 years ago. The Great Grandfather of Tony Hunter, Pietro D’orsa, left Italy in 1868 to make a new life in Australia, becoming a vigneron in the town of Maldon 100 km west of Heathcote. 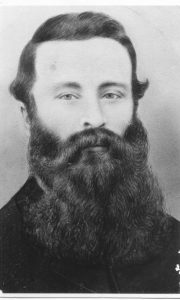 It was the allure of gold that attracted many Europeans to the Victorian Gold Rush in the mid to late 1800’s. In 1851 Victoria had a population of 76,000; 20 years on it had increased to 1.7 million making Melbourne the largest and richest Australian city.  During this time a great number of young and old men headed to Maldon, near Castlemaine in central Victoria, eager to make their fortune in the diggings after gold was first discovered there in 1853 And in 1868 Swiss-Italian Pietro D’Orsa 32, left his small Swiss village of Poschavio to join a cousin who was already on the dig in Maldon. Whilst he left his young wife behind (she was to join him five years later) Pietro brought with him a bundle of cuttings from his grapevines.

“We do know that Pietro planted his vineyard, made his wine and raised a family in this small Central Victorian town not far from the site of Sanguine’s vineyard and winery in Heathcote,” says Better Than Pommard-A History of The Victorian Winemaking Industry author David Dunstan.  In 1996 recently retired Tony and Lyn Hunter purchased a farm but instead of building a house and buying farm animals as originally planned, they followed Tony’s love for wine, particularly Heathcote Shiraz and hand-planted some vines

“I’ve always wanted a family business and assumed the chance had passed me by but I thought perhaps we could grow grapes and make our own wine,” says Tony.  Whilst none of the family members had any experience in growing grapes or making wine, they planted their first 16 acres in 1997 and then continued planting every year until 2002 to reach a total of 55 acres.

After Sanguine’s first vintage was bottled, Tony was reading Better than Pommard and came across a listing of early Victorian Vignerons and there he discovered that the Board of Viticulture registered his Great Great grandfather Pietro D’Orsa as a vigneron in 1892.  For the Hunter family this discovery was simply amazing.  Together, now with Sanguine’s chief winemaker son Mark, and daughter CEO Jodi and daughter-in-law CFO Melissa, they visited the Maldon site of Pietro’s vineyard, met family they never knew existed who still owned the property and found remnant vines.

It was then they discovered the six remaining surviving remnants of Pietro’s vineyard; old knotted vines with dead arms and thick trunks and of DNA testing provided another surprise; one of the vines that made journey to Australia years ago was unable to be identified  This unknown variety, for which there is no record of in Australia is now grafted to a special vineyard at Sanguine.  It’s an aromatic pink grape with flavours of cumquat and mandarin and has been made into a dessert wine, however quantities are limited so it is currently only for family.

And a tribute to this long lost ancestor, Sanguine winemaker and Pietro’s great, great grandson Mark Hunter kept some of the best barrels of 2006 Heathcote Shiraz and named its first reserve wine, D’Orsa.  It has become more than apparent that these early settlers like Pietro D’Orsa played a pivotal role in the development of the Victorian wine industry in the mid 1880’s. As writer David Dunstan sums up “The relationship between gold and wine was a vital ingredient in the good start given to Victoria’s nineteenth century wine industry.”

For the record, in 2016 Sanguine D’Orsa Shiraz was voted the fifth best Shiraz in the world up three places on the previous year also won the coveted Heathcote Grand Terroir Trophy in 2015 and 2016.