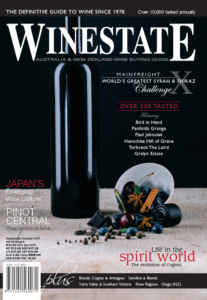 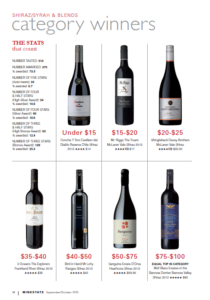 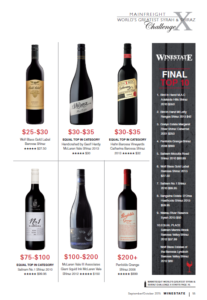 Sanguine Estate’s latest release 2013 D’Orsa Shiraz has been awarded 5 Stars (Gold Medal), best Shiraz in the “$50 to $75” category and 8th best Shiraz overall at Mainfreight World’s Greatest Syrah & Shiraz Challenge just 3 spots behind the 2008 Penfolds Grange Shiraz (valued at $899).
The results of the challenge are featured in Winestate’s September/October issue of the Magazine hitting shelves on 1st September 2015 and distributed within Australia and New Zealand as well as Asia, USA and UK reaching in excess of a 100,000 consumer and trade readership in Australia and New Zealand alone.
510 Shiraz wines from Australia and around the world were judged and in keeping with the international theme, 20 wines were sourced from France, South America and South Africa with only those imports recommended by the judges included in the tasting.
Only 34 out of the 510 Shiraz wines achieved 5 Stars (gold medal) and Sanguine Estate’s 2013 D’Orsa Shiraz was among them.
All wines were judged blind over 4 days by panels of 3 winemaker judges and 1 master of wine judge. Following this, the 5 star wines were re-assembled and a stellar judging team of Bill Hardy (Accolade’s chief oenologist), former chief winemaker of Penfolds and Master of Wine, Phil Reedman and Ian McKenzie former chairman of Capital City wine shows and panel Head judge at our very own Heathcote Wine Show determined the top 10 of the Challenge.
The D’Orsa not only achieved the winner of the $50 to $75 category but was also positioned 8th in the Top 10, placing the D’Orsa in the top 1.6% of the entire challenge and standing in such fine company as Wolf Blass, Bird in Hand, Saltram and Penfolds Grange.
Winestate’s Sales and Marketing Manager, Peter Jackson stated “It’s not every day that you can claim to be the 8th best Shiraz in the world an accolade that is well deserved by Sanguine Estate.”
Sanguine Estate is not new to success in this challenge achieving $20 to $25 category winner and placed 7th in the Top 10 for its 2012 Progeny Shiraz in the 2013 challenge and $20 to $25 category winner for its 2013 Progeny Shiraz plus equal top in category $50 to $75 range for its 2012 D’Orsa Shiraz in the 2014 Challenge.

Winemaker Mark Hunter, was thrilled with the results “To be in the company of Penfolds Grange and Bird in Hand just seems unbelievable to me. I had never even dreamed I could be producing a wine that would sit among these amazing brands”
Winestate is in its fourth decade of judging Australian Shiraz but it has only been in the last ten years that iconic wines from the old world have been sourced.
Provided Sanguine hasn’t run out, the newly released D’Orsa Shiraz will be on tasting at the cellar door every weekend and at the Heathcote Wine and Food Festival on October 10th and October 11th.
For more information please contact
Jodi Marsh
CEO
Jodi@sanguinewines.com.au
0409 140 507
Telephone Interviews possible with Peter Jackson, Sales and Marketing Manager of Winestate Magazine.