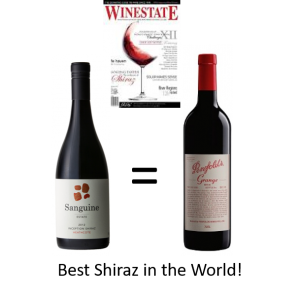 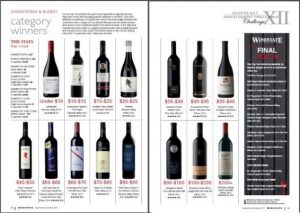 Over 427 Shiraz wines from Australia and around the world (namely France, South Africa, Argentina, Chile and New Zealand) were judged and included iconic wine brands purchased by the organisers that are not normally entered into wine competitions such as Penfold’s Grange and Henschke Hill of Grace from Australia and M. Chapoutier L’Ermite, E. Guigal Cote Roti La Turque and Paul Jaboulet La Chapelle from France.  Only 40 out of the 427 wines (9.36%) judged achieved 5 Stars (gold medal) including Sanguine Estate’s 2012 Inception Shiraz and 2012 Progeny Shiraz.

All wines were judged blind over 4 days by panels of 3 peer winemakers and trade judges. “…. all 5 star wines were analysed to determine the highest score in each price range to thereby deliver the category winners and a final top 10.” writes Peter Simic Editor/Publisher.

Competition for the top 10 was so tough that for the first time in the Challenge’s history the organisers decided not to rank the Top 10 from 1 to 10 explaining “For our Top Ten selection this year it was impossible to separate the very high point scores that the judging panels awarded to the wines. Each wine achieved a unanimous 18.5 points from each of the three judges involved. We could have done a “judge off” but decided this year that this would not have done justice to the exceptional quality of the wines involved. At this high level it would have come down to a judges preference rather than a quality decision and that would have been unfair to the bottom wines in any Top ten ranking. Hence the “no particular order” rating was decided”

This means that Heathcote’s 2012 Sanguine Estate Inception Shiraz achieved the best Shiraz in the challenge alongside some of Australia’s and France’s most iconic brands.

“We couldn’t be more proud of Mark and although he is not new to achieving outstanding results in this particular challenge, this is the first time he competed against Penfolds Grange with the same vintage – comparing apples with apples. With only three 2012 vintage wines in the top 10 the other being another iconic Australian brand Wolf Blass Platinum Medlands Estates of the Barossa valued at $200 – that’s pretty impressive” comments Jodi Marsh (CEO of Sanguine Estate and sister to Winemaker Mark Hunter)

“My sister surprised me with the results at our Annual Sanguine Estate Family Dinner recently and it has only just sunk in how significant the result is.  My focus every year is to simply make the best wine I possibly can and to achieve this height just seems unbelievable” said Mark

Sanguine Estate is not new to success in this challenge, here is a summary of recent years